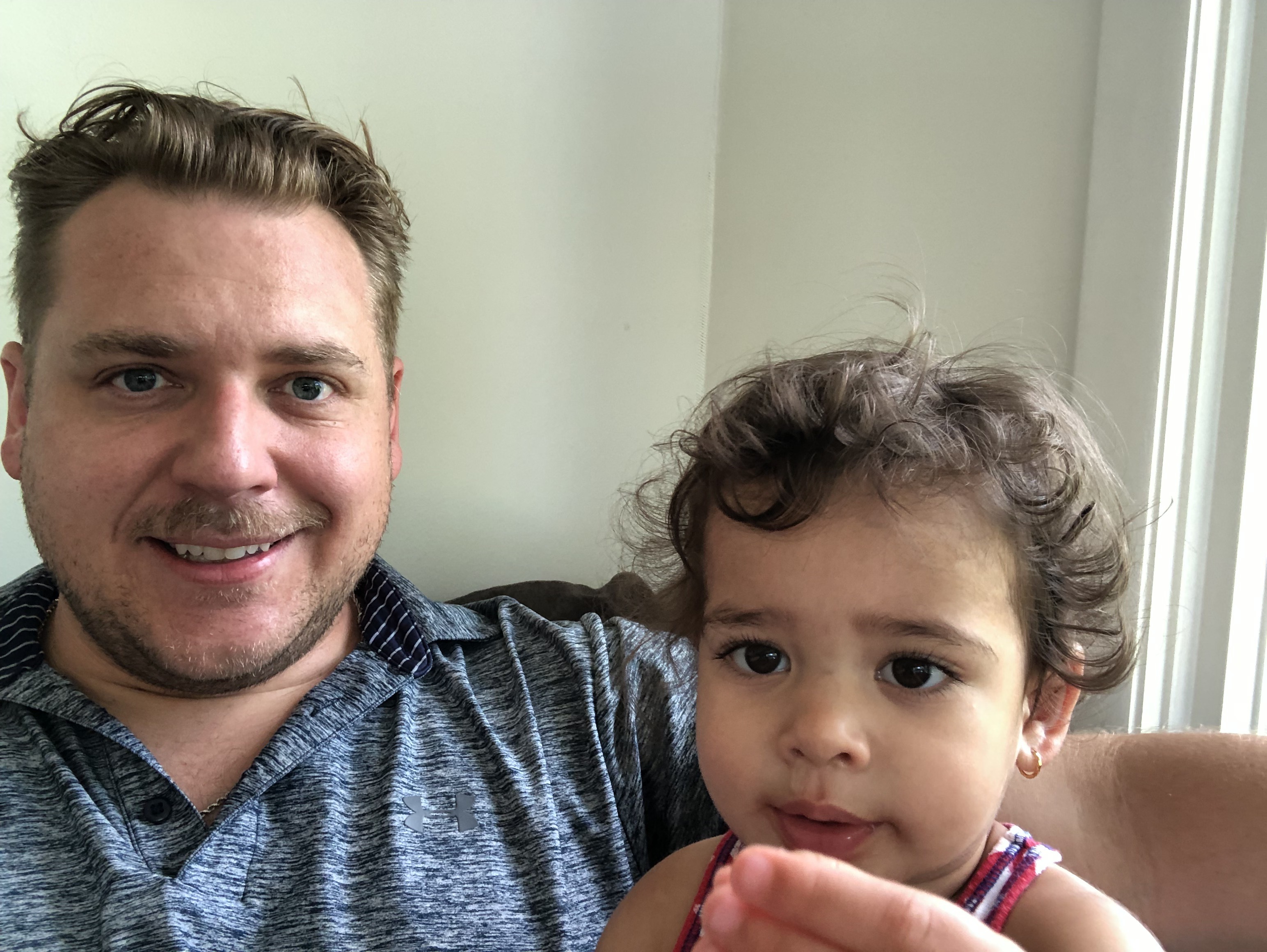 My title is senior director of client delivery. When I first talked with Ursa Health about a role here, we discussed what the best fit might be, and client delivery made sense given my experience with consulting. I like interpreting results, staying a step ahead of clients, and leading them to the answers that they're looking for.

But honestly I didn’t really care about the specific title or role. I just want to work here and knew I’d find a place where I could add value.

I went to school here in Chicago, and during the summers I worked for my friend's dad who owned a medical practice that specialized in infectious disease, mostly doing back office stuff like stuffing envelopes. Then I started picking up a few hours a week during the school year as well and expanding into other areas. I got exposed to pharmacy, billing, and credentialing operations, and without realizing it pretty soon I’d gotten a good survey course in provider operations.

I did that for a little while after college and then took a job as a statistical analyst at the Blue Cross Blue Shield Association. They were looking for someone with an economics background, which I have, and the first three or four years I spent most of my time working with actuaries and underwriters. I was responsible for the BlueTrend survey, which is a medical cost and utilization benchmarking report that goes out to all the Blue Plans. They submit their data, and we would aggregate it and develop summary statistics. That was really cool, because I was continuing to pick up all of these different pieces of the healthcare landscape. Eventually, I moved toward  the finance side of the association, working with the people at Blue Plans who are responsible for filing financial and enrollment reports to make sure they're in compliance with association standards and guidelines. There, I also dabbled in enterprise risk management. And then, in my final year, I was, managing a team in the financial planning and analysis department.

It took me about a year to realize that's not what I wanted to do. It's all very retrospective looking. I was in the process of completing my master's degree in data science at the time, and graduation was a good time to leave the association and start to look for something in healthcare analytics.

I started at HealthScape Advisors to help them build their analytics practice, although in the beginning I was basically a management consultant that happened to work on big data projects. Eventually the company brought in a chief analytics officer, and he and I built the team from just the two of us to nine or ten people by the time I left. We developed our tech stack, developed protocols for how HealthScape should approach analytics engagements, wrote up job descriptions for additional staff that we needed on the team, and so on. Importantly, for me, we also worked with Ursa Health on a joint partnership with a client. I met Andy [Hackbarth, Chief Product Officer], Aaron [Mock, Senior Vice President of Operations], and Robin [Clarke, Chief Executive Officer], and I went through the Ursa Studio training, worked in the Ursa Studio platform, and collaborated with them in delivering insights for the client into their emergency department utilization.

I was later recruited to join an analytics company, which was exciting to me because of the narrower focus on analytics. There, I was on the client delivery team, and I found that many of our solutions for clients were one-time use cases or done outside of the product more than I would have liked. When I got a call from Aaron asking if I’d consider joining Ursa Health, I knew I’d love it.

Was it that exposure you’d had to Ursa Studio that made you so certain this was the right choice?

Just before we became attached to Ursa Health in that prior engagement, I had just finished my own engagement in the area of episodes of care. We were trying to create a bundled payment, a value-based structure between the health plan and the client. This was before we had developed our analytics team, so I did all of this encounter analysis by hand in SQL. And it took me a couple of months, going back and forth with the data teams on both sides and constructing these complex timelines. But they were really brittle. If you needed to change a spec somewhere, then it was easy for something to break. It was complicated, labor-intensive work, but I enjoyed doing it.

We started talking to Ursa Health, and over the course of a one-hour meeting, they basically replicated the work. And I was, like, "Where were you guys months ago?" I just couldn't believe that they were able to, in the first place, understand my use case right away and say, “Oh, yeah, episodes of care, we can do this in a timeline.” And then that they just did it, with me watching over their shoulder, over the course of an hour. It was incredible.

Working for a company whose product works shouldn't be that surprising or exciting, but honestly I've never seen a tool like this that just works. It works out of the box shockingly often, and the things that don't work out of the box people can configure in days. It comes down to the data model. It’s something I've never come across before, although I've tried to practice these principles, to make things portable and reusable and transferable and interoperable. But when you're working in consulting, you don't have the time to be forward thinking like that. You just start writing code that serves the need you have right now. And you’re always thinking, if I have time to go back, I could refactor this so that it would be more scalable and flexible. Or I could build it better, so it wouldn’t be so brittle. But you’re on to the next thing.

I’ve never seen a data model as resilient and scalable as Ursa Studio’s. And that's just one piece of it. Then you get into all the other the actual applications, the user interface, and so on.

Even more than that, up until my experience with Ursa Studio, I had been going to various subject matter experts for specific things and at the end of the day feeling like I was the authority — and I didn't feel like I should be nor did I want to be. Every single person I talked to at Ursa Health was the authority. You could trust that they knew what they're talking about.

It's so corny, but like I said to my wife, I can't remember the last time I was so excited to start work each day. I've had jobs before where you're working remotely and you need to log off to take care of the kids or something, and then after they're all squared away you come back to your desk to knock some stuff out. And there have been some nights like that here, but I actually want to log back on and check some things, play around with some objects or just dig around. I just genuinely want to do that. And each morning starts with "What can I get done? What can I build on that I've already started?" It's exciting.

People talk all the time about corporate culture, but so often it's just handing out surveys or talking about values, not getting at the heart of it. Here, the culture manifests in the way people work, and that's taking the long view of an analysis and thinking, "What can I repurpose? How do I build this so that I can use as much of the structure as possible before I start fine tuning it for this specific application?" It’s doing things the right way and focusing on the details. For example, I love how fastidious Andy is about naming objects, because we've all been there before, where you're rewriting some lines of code and some variables are named some ambiguous thing. The attention to detail and doing the little things right comes through, and that's what I see as the culture here.

What is the one thing people are surprised to learn about you?

I'm the seventh of eight kids. My two daughters are the 16th and 17th cousins in that generation. We all live within a 15-minute drive of each other and see each other all the time.

Also, I'm really good at cooking Indian food. I thought I didn't like it until I met my wife. Her mom does a lot of cooking, and I took an interest in watching her cook and learning a lot of her recipes. Now I make those and put my own twist on them or otherwise incorporate Indian flavors into my cooking. One big takeaway that you could do for any style of cooking is tempering the spices. You take whatever spices — let's say clove, cardamom, cinnamon, maybe a couple other things — and toast those in a dry pan for a couple minutes. And then you can add your oil or whatever. That brings out the flavors.

I love to cook, and a like a project, so a lot of what I do is barbecue or something else that requires a long, slow braise, particularly on the weekend. But Indian food is amazingly quick. You can start with the raw ingredients and have it all ready by the time the rice is done. It's crazy. And you get so much flavor in such a short amount of time.